Every year hundreds of activist from all over Europe come to the actions of Ende Gelände in Germany. Since 2018 Ende Gelände mobilizes to climate camps and actions for climate justice across Europe with its campaign Ende Gelände Goes Europe (EGGE). Last year we went to the anti-gas action of Code Roode in Groningen (Netherlands) and the anti-lignite protest of Limity jsme my in Czeck republic. This year we support the Power Beyond Boarder Camp in the UK and the first Italian Climate Camp in Venice. Taking action with our friends across Europe is living solidarity. Climate Change knows no borders so nor do we. 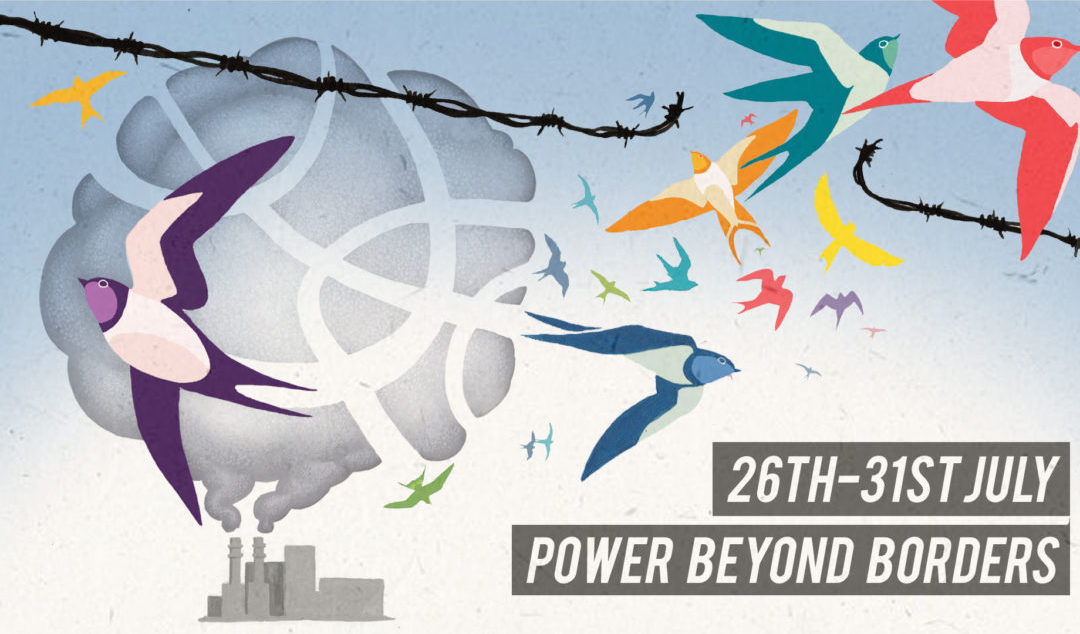 Power Beyond Borders will be a mass action camp which aims to show solidarity with migrants as well as taking direct action against new gas infrastructure. From 26th to 31st July in the UK.
For more Information see the Homepage and the Facebook Event.

Interview with Alice Swift of Reclaim the Power on the relationship between anti-racism and climate justice.

In Italy, as in the rest of the world, thousands of people have taken to the streets against climate change in the last months – climate activist, students, local people that are affected by climate damaging projects, and many more. The special in Italy is that in many cities and villages there are already for years powerful initiatives against projects endangering the climate and the environment. These initiative now come together in one movement for climate justice and against large-scale works and invite us to Venice to the first Italian Climate Camp.

The latest IPCC report clarifies the gravity of the situation and the few years remaining to reach zero net emissions require a radical change of course. A revolution that must transform our energy model (fossil fuel-free), our model of territorial management (stop large-scale works, land consumption, environmental devastation) and the one that regulates the food cycle.

Venice, as a coastal city, a city where water and stone interpenetrate, will be particularly subject to the effects of climate change and rising sea. Yet, instead of thinking about how to face this great challenge, billions of public funds have been diverted towards wrong solution like the M.O.S.E. project that’s supposed to protect the cities from floods. Never the less, large cruise ships, polluting and devastating for the environment, continue to pass a few meters from San Marco’s Square.

We and climate activist from all over Europe are invited to make Venice a symbol of the fight against climate change. Let’s use the International Film Festival that will take place during the camp as a global stage to be seen and heard!

The camp will be set-up at a occupied beach at the Lido island with a minimum environmental impact. There will be workshops, debates, time to network and fun plus a great action against large cruise ships.

There are several good train connections to Venice. Because the Italian train company (Trenitalia) and the Deutsche Bahn don’t work together properly it makes sense to check both sites for cheap tickets. The Austrian train company (ÖBB) operates night trains from several German and Austrian cities. The station is called Venezia Santa Lucia from there on you can take a ferry.

Soon we will publish more information.

At the camp a few backpacks and other valuables were left behind. One person has taken these things to Cologne, xou can get in contact via Camp Organisation

News-Blog directly from the Hambacher Forrest

The Legal Team for all is the anti-repression-crew for the actiondays 2017, 2018 + 2019. If you have any questionns, contact them: legal_team_fuer_alle@posteo.de (pgp-Key). Please also write to them if you recieve any letters or similar things from the police, court or prosecution after the actions. Our solidarity against their repression!

Whoever is contacted by the police, state prosecutors or Vattenfall because of participating in Ende Gelände 2016 (!) please contact as soon as possible:
cat@nirgendwo.info (pgp-Key)

If you get any post regarding Ende Gelände 2015, whether it is from the police, state prosecutor or RWE sollicitors: do not sign anything. If any of these bodies attempt to get in touch, do not respond. For advice on further steps please contact: antirrr@riseup.net (pgp-key)

Don't sign anything without consultation! -
Together we are strong!